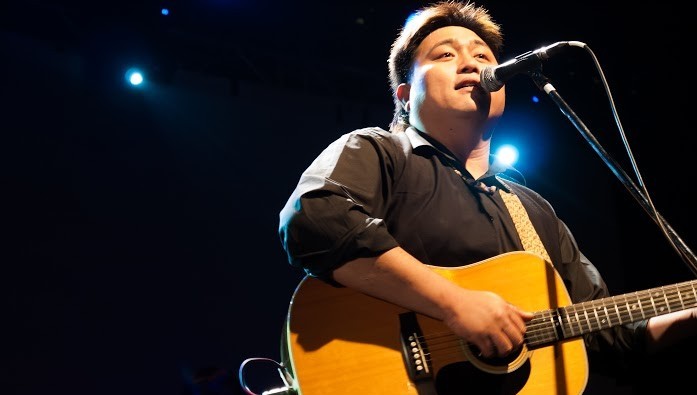 Interview with Hao-en／A Man Made Complete by Music（1） In August, Hao-en released his new album Legends of Passage, a collaboration with Daniel Ho. Photo courtesy of Wind Music.

After the duo Hao-en and Jia-jia won the Best Group award at the 18th Golden Melody Awards in 2007, Jiajia worked as a backing vocalist for A-mei and Lo Ta-yu during their concert tours. Her talent was later spotted by Mayday's Ashin, who got her to join B'in Music. What has Hao-en been up to then? That's something we have been wondering.

"My mum felt that music isn't proper work, only entertainers do music." Not all dreams are sustainable, just as Hao-en's were not. After his father's passing, Hao-en gave up his music career and a role as a police officer (later played by Ming Hsiung) in the film Cape No. 7, choosing instead to help manage a bed and breakfast, which was eventually closed down due to business issues. Yet all this while, Hao-en has never given up on the idea of doing music.

“Your performance today was great, would you like to make an album with “him”?” said Wind Music founder Ken Yang after a performance by Hao-en, who simply replied that he would think about it. “I assumed he was joking.” But after spending one and a half years listening to “his” albums, they grew on Hao-en, who later through Wind Music, actually managed to get “him” as a producer for his new album.

That “him” is the ukulele master Daniel Ho, winner of six Grammy Awards.

“Where the album is concerned, I was the one being made complete. Daniel’s desire to help me really showed in this album. Think about it, does he even need me to expand the market or generate more fame? It was purely because he that felt my voice could be introduced to other places.” Hao-en was particularly grateful to Wind Music for linking him with Daniel, for without Wind Music’s help, he would not have been able to work with a Grammy Award winner.

Coming from different language, cultural and music backgrounds, Daniel and Hao-en are seemingly separated by a lot of differences and in need of a common ground. For Hao-en, the easiest way to do so was to recommend what in his opinion was good music to Daniel. “To you all, and to Daniel, Taiwan’s aboriginal tribes are hard to tell apart. Even the aborigines themselves sometimes find it difficult. And since you can’t tell the difference, why is it that in addition to a sense of longing and homesickness, aboriginal albums tend to carry the burden of promoting their ethnicity. Be it in terms of writing or performance, we have to show others who we are, which limits our freedom instead.” Putting aside all these differences, the wish to let people enjoy good music is the one biggest common ground, as well as the original goal of this album. ◎Legends of Passage, an album with fewer than 10 tracks

When speaking about the album Legends of Passage, Hao-en asked, “Did you feel anything missing compared to contemporary music these days after listening to it?” “The desire to please the crowd”, I replied. With Daniel’s name on the album, it is not unexpected for more than one or two hundred tracks to be produced. This was exactly what Hao-en thought. “But Daniel simply worked with his instruments, just as I did with the guitar.” The guitar, bass, ukulele, piano, backing vocals and vocals, these were the only things involved. The entire album contains fewer than 10 tracks, yet it remains rich in content.

“The Chinese music market is no longer a simple one. “Please the crowd” pretty much says its. We don’t know why we’re doing so much anymore, only that anything less would make one’s work a demo”, lamented Hao-en.

In spite of all the obstacles and issues involved, we still need people with unshakeable faith to support this world. Hap-en came to such a realization after completing his album, which is that music of a simple yet content-rich nature must continue to be made by people. During Hao-en’s collaboration with Daniel, he noticed how open-minded Daniel was despite his status in the international music scene. He recalled most vividly how Daniel would always be open to Hao-en’s opinions about music. Daniel also used all of Hao-en’s chord progressions and the simplest instruments to outline the sincerity in Hao-en’s music.