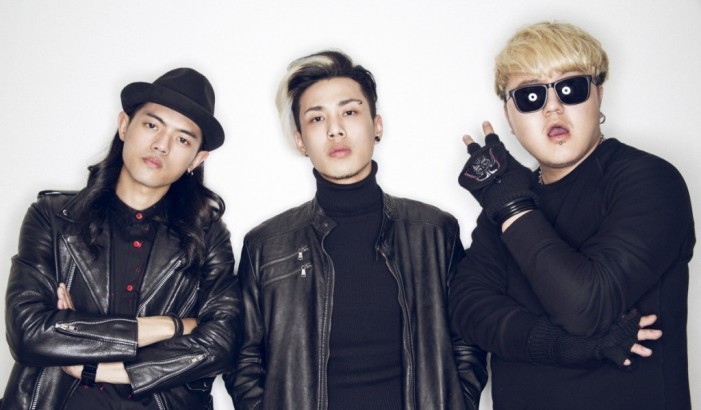 Interview with TRASH／ “We Wish to Release Everyone’s Emotions, whether It’s Joy or Sadness” TRASH, the rock’n’roll band of the new generation was born in Dec, 2009.  They released the self-titled debut album “TRASH” in 2012 and has won the championship in Gongliao Hohaiyan Rock Festival（貢寮海洋音樂祭）in the same year. Following the award, they had been quite busy doing the performance at different places, including Singapore, Hong Kong and South Korea.  They cooperated with Tony, the lead vocalist of “Monkey Pilot（猴子飛行員）” in “Start from Zero（歸零）”, their second album of this year and they were later nominated for “The Best Band（最佳樂團獎）” at the 26th Golden Melody Awards（金曲獎）and “The Best Live Performance（最佳現場演出獎）” at the 6th Golden Music Indie Awards（金音獎）because of this album.

Along these years, TRASH has changed in some parts, but stay the same in others.  The three of them still love playing the music and they won’t stop colliding with the reality while looking for other ways out at the same time.  However, they see things from broader aspects after getting more mature along the way and the change can be seen in their music.  We got the chance to interview with TRASH before the Golden Music Indie Awards Ceremony.  They were just like three big boys, talking about their music maturely while joking around with each other.

◎This is what everyone is curious about: Where does the name “TRASH” come from?

Lin Zhi-Rong（阿夜）says “We used to be big fans of Nirvana（超脫樂團）, spending lots of time listening to their decadent music and we were actually in that kind of state as well.  By the time we needed to come up with a band name, we wanted something that is easy to remember and a little kuso.  We thought of ‘Garbage’ at first, but the name was already used in some other band abroad so we came up with ‘TRASH’, the synonym of garbage.  Though the name TRASH doesn’t totally meet the state we’re in right now, it’s still quite cool.”

◎After the band was formed in 2009, you’ve released albums, performed in Taiwan and other countries and were also nominated at both Golden Melody Awards and Golden Music Indie Awards.  So what is the thing you think you’ve changed along the years.

Wang Wei-Xiang（金魁罡）: “In the music part, you can see the clear difference in our thoughts between the first album ‘TRASH’ and the second one ‘Start from Zero’.  When we started the band in 2009, we were still students, but we’ve met more people and experienced more things after graduation.  Our thoughts were more diverse and we could see things from a broader view and our music just reflected our experience in lives. ”

Lin Zhi-Rong: “We were in the state of anger when producing the first album so we just wrote down all the things that pissed us off.  When producing the second album, we didn’t need an exit to release our emotions anymore and when we broadened our vision, we found other emotions to release besides anger.  Not until we’ve done the performance in other countries within these years did we realize that the things we saw in Taiwan were very superficial and the world was totally different from what we’ve pictured before.”

Yi Yuan（頤原）: “At the beginning, we were just like those bands that do underground music, but our fans have multiplied after the competition and the performance, which was a really big change.  We used to have a narrower view about music and are more pessimistic, but we became more objective after knowing more things.  We put too much pressure on ourselves while doing the music in the past, always worrying that we were not cool enough and caring about what other people thought about us, but now we are back to the origin ─ just make ourselves happy and that’s all.” ◎What do you feel about being nominated for “The Best Live Performance” at the Golden Music Indie Awards again this year?

Wang Wei-Xiang: “Quite nervous actually.  Though we are told to treat it like no other event, we are still nervous.  There’s no way we can stay calm!  We are actually not that stressed out this time since winning the award is not a must for us.  We just want to do a good performance and the award doesn’t matter that much.”

Lin Zhi-Rong: “To be honest, this is the last award I want to be nominated for because I don’t want to do the performance.  It is really stressful to perform at such a formal ceremony.”

◎You’ve been touring in Asia with Guntzepaula（槍擊潑辣）this year.  What is the thing that impress you the most?

Wang Wei-Xiang: “I’ve changed my impression for them because of the tour.  They seem quite cool on the stage and don’t talk a lot.  However, they are actually very childish when they’re off the stage.  People who are in the band are all like this! Ha ha!”

Lin Zhi-Rong: “I’ve seen different colors from different countries in the tour.  Like Singapore is not the kind of countries with a thriving band culture.  And after performing in many cities in China, I found that every place has their own custom.”

Yi Yuan: “We didn’t know what completely professional was like until arriving in Japan.  Not matter it’s setting up the stage or doing the performance, they all have standard operation procedure.  We felt that we were really unprofessional when we were there.  We were quite depressed on that day.” ◎After performing in different countries, do you find any difference between fans from different places?

Lin Zhi-Rong: “I like the atmosphere while performing in South Korea.  The audience there don’t care that much about who the performers are as long as they find your music acceptable.  On the other hand, the audience in Taiwan like to judge the performance, standing with folded arms while criticizing the performance.  As in China, you have to pay special attention to some sensitive phrases, but I usually pretend that I don’t hear it.”

Wang Wei-Xiang: “I was impressed by the audience when we performed in South Korea for the first time.  Basically, no one knew who we were at that time, but they still enjoyed our music and danced with it.”

Yi Yuan: “Singaporeans are really shy.  They won’t move closer to the stage while watching the performance.  There is always a huge gap between the audience and the stage.  They just sit on the chairs and clap, even if they’re really into the music.”

◎What will you do if the audience are not relaxing at all?

Lin Zhi-Rong: “The audience are just like the reflection of the performers.  When seeing the performers putting all their effort into the show, the audience will be influenced somehow.  But later on, we also find that some people won’t be influenced at all.  It doesn’t mean that they don’t enjoy the music; it’s just their habit.”

◎Do you have any must-dos before doing the performance? Wang Wei-Xiang: “We like to watch movies ─ it’s the source of our inspiration.  Many songs in our first album are inspired by the movies we watched.”

Lin Zhi-Rong: “We like to cook as well.  We’ll hold a dinner party and invite other bands to join us.”（Can you picture the scene with a group of rockers gathering together having dinner?  The contrast is striking, but also pretty attractive.）

Yi Yuan: “We like to talk about aliens and the mysterious power these days.  We may just form a scientific group or set up some alternative radio station.（Laughing）”

（Trash says that they are having a great time with the band “Fresh Juicer（血肉果汁機）these days.  I think there must be some mysterious religious power pulling them together.）

◎What are your future plans?

Lin Zhi-Rong: “I hope that our music can release everyone’s emotions, whether it’s joy or sadness.”

Yi Yuan: “Our goal for the long term is to turn rock’n’roll into pop music.”

Talking to TRASH is just as joyful as talking to friends so time has passed really fast while interviewing with them.  When I asked them whether there will be any surprising moment at the Golden Music Indie Awards Ceremony, they glimpsed at the lead vocalist of Gigantic Roar（巨大的轟鳴）sitting in the chair opposite and told me mysteriously that they couldn’t leak the secret while their opponents were around.  If you want to feel the stage manner of TRASH in person, don’t miss their recent tour concert “Live in Live” in Taiwan.