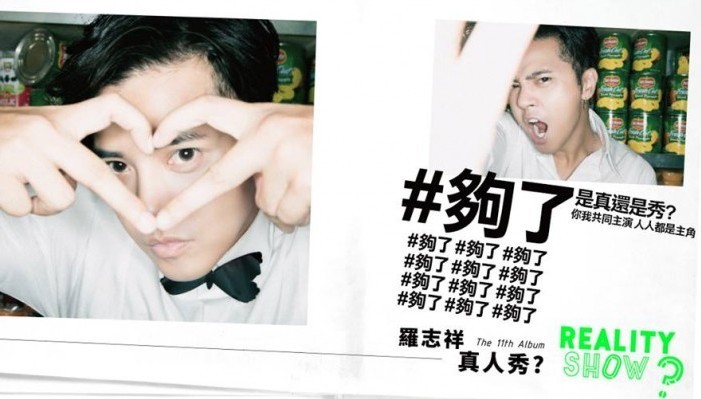 After two years, Show Luo is back to the singing stage, with his 11th album “Reality Show?” being released on Nov 20th.

It has been 21 years since Show Luo made his debut and his private life has been popularized by media within all these years.  In the album “Reality Show?”, Show Luo has turned the feelings he had during the two years into songs, conveying the idea that there are both “reality” and “show” in our lives and he also uses his humor to deliver his observation for lives and his self-transmutation.  Show Luo says “I want to use some humor to convey the idea that our lives are mixed with both ‘Reality’ and ‘Show’.  That’s what the fun is about.”

To promote the first single, “Let Go”, Show Luo has invited many artists and fans to make a sentence with the phrase “let go”.  Elva Hsiao（蕭亞軒）says “The media has been saying that I’m having an affair with hunky boys.  Just let go!”  May Day（五月天）has also got together and wrote on the paper “Let Go!  Even Director Lo has GO!  You should GO buy it too!” All the artists' support photos. Photo from Show's FB.

“Let Go” is a song written by Show Luo, which wishes to use the power of music to fight against cyberbully.  He shows the true features of cyberbully with the lyrics “You can only type those mean words while hiding in the darkness.” and “You’re both a spectator and a murderer.”  The music video is directed by Muh Chen（陳奕仁）, who has made an investigation especially for this music video, finding out that the most common issues related to cyberbully are stature, sexual orientation and occupation（artists or celebrities）.  Show Luo says “I was very chubby when I was a child and I’ve been bullied as well.  I understand the depression when being bullied.”