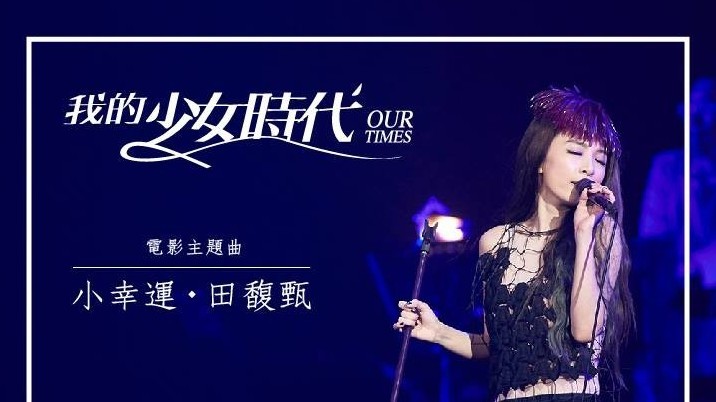 Taiwanese chanteuse Hebe Tien has returned to her musical stage with a new single titled "A Little Happiness"（小幸運） as the theme song for recently released movie "Our Times"（我的少女時代）. But after listening to the single for myself, it’s definitely not just the movie which has made this song such a success. The melody and the lyrics are subtly infused with the taste of bittersweet nostalgia, with simple but effective arrangements that move listeners, taking them back to the old high school days. Hebe’s voice, however is the definite star of the show. Crooning gently and carefully to begin with, her voice encapsulates pockets of vibrant imagery and nuances that truly tell a story. By the end, her voice has taken on a lot more depth and strength, almost like powerful flashbacks of memories racing across your mind, as you desperately try to grab hold of that youth; that feeling of being indestructible and ready to chase whatever dreams you had.

So the song at the moment has about two million hits on YouTube, but from my Facebook feed, I think the response is much larger than what those figures are reading. And boy, has the craze been sweeping the nation. All that comes up on my feed are cover after cover of Hebe’s song, so much so that I just listen to snippets of each, trying to root out the good from the bad. So ultimately, what I was looking for was a cover that could rival that amazing emotional power of the song. So here are six covers that managed to catch my attention. See how they fared!

One of the most creative of the covers I’ve watched so far. Not only did they make changes to the melody, but also to the entire arrangement of the song. Jazzing it up a bit, Ape’s voice is reflective and melancholic. I can definitely tell a lot of effort has been put into this one, and would say this is the most well-produced and complete cover of the lot. Well done, but I do have to say it kind of detracted from the bittersweet emotions of the lyrics which initially brought a clean kind of sadness that comes from nostalgia and remembering ‘the one that got away’.

Actually by the time I found this version, I was on the verge of finishing this editorial. However, there really was something about this cover which I couldn’t let go of. Independent artist Sabrina Lo’s raspy yet sweet and warm vocals were the first thing that caught my attention and kept me listening to the end. Although not 100% perfect, out of all the covers, I feel that this one had the best vocals which encompassed the bittersweet lyrics, yet had its own unique feel to it. Also, props to her for putting together an electric guitar/acoustic guitar based arrangement. Despite it not fitting together at some points, I especially appreciate the bite and interesting livehouse feel the rhythm of the acoustic guitar brought to the song. Added points also for the use of percussion and the guitar solo in the middle, extremely creative! However there were some technical slip-ups in the cover and overall I do feel there were too many elements going on in the song; all of them interesting but when crammed together in one song, confused the listener a little.

A bit too slow for my liking, and fails to truly capture the essence of the young impulsiveness Hebe sings of in her original version. I feel acapella where the whole group works together, but in VOX’s version, it seems that they’re all simply seen as instruments backing up the frontman, so I’d definitely like to see more unity in their arrangement. Nevertheless, I’m not going to say it was an easy feat putting this one together and the frontman pulled off the vocals solidly. Extra points for creative use of genre and arrangement!

One of HIM’s upcoming artists, Karen’s definitely added her own style to the song. Although just a simple guitar arrangement, her vocals are most definitely the most standout point here. From the first note, I fell in love with her emotive and seductively raspy vocals. I like to compare her to Taiwan’s Duffy; with her own unique signature style this was one of the most pleasant covers I had come across.

There are so many covers of pretty boys out there singing Hebe’s “A Little Happiness” and playing the guitar,  hoping to maybe catch the attention of some romantic, doe-eyed females, but Dean Wang’s cover brought something a little different to the table. Starting off with an interesting and pensive guitar part and a smooth and gentle tone, he sounds like every other Taiwanese singer until he lets rip with his raspy and layered vocals in the chorus, truly adding another dimension of emotion to the song. I especially like how the backing vocals didn’t overpower his voice, but added to the strong, underlying passion of his voice. Me likey!

Of course, this cover collection isn’t complete without a rendition by some of the main characters from the movie itself! With Dino on the piano and Vivian on vocals, I think they overall did a commendable job in conveying the emotion of the song. Vivian’s voice is emotive and steadfastly passionate against a classic and simple piano arrangement by Dino. A good effort overall.

Verdict: Alright who am I kidding, Hebe’s is definitely still the best of them all. However, all these covers had their own creative take on the song and it was a definite pleasure listening to them all! Points for everyone!

Who Did It Better? Jolin Tsai-‘Play我呸’
See More