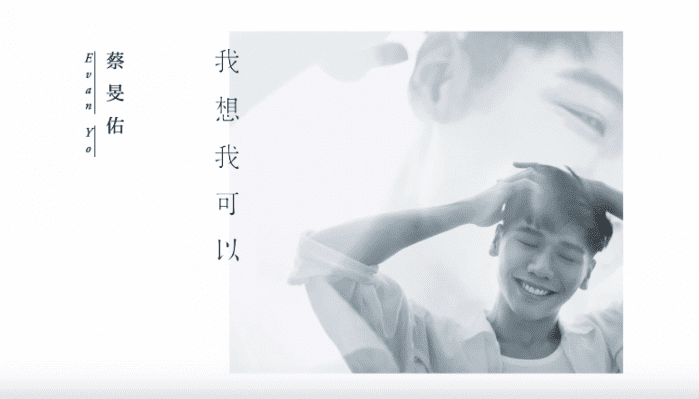 Evan Yo（蔡旻佑）／I Think I Can

It has been three years since Evan Yo（蔡旻佑）, the singer-songwriter who is famous for the song “I Can”（我可以）released the latest album Super Yo（超級右腦）.  Evan Yo also kept himself busy during this period, performing in the TV series “Fabulous Boys”（原來是美男）, “Kiss Me Mom!”（媽，親一下！）, the new year’s film “Lion Dancing 2”（鐵獅玉玲瓏2）and the tour of Jimmy’s（幾米） musical “Turn Left, Turn Right”（向左走向右走）.  This April, he also became the coach of the reality talent show “Super Star”（我要當歌手）.  After learning from different experience within these three years, Evan Yo’s newest extended play of 2015 “I Think I Can”（我想我可以）is finally released in Taiwan on Sep 11th.

It has been nine years since I accompanied you to see the stars.  What is your love story now?  Evan Yo asked many singers to sing the ballad “I Think I Can” on social media before releasing the whole song, creating an air of expectancy among the fans.  He also shows his remix skill through “I Think I Can”, mixing “Etude”, the classical piano song written by Chopin with his own song “I Can”.  Using the piano solo as the opening, Evan Yo narrates the love monologue after the boy grows up.