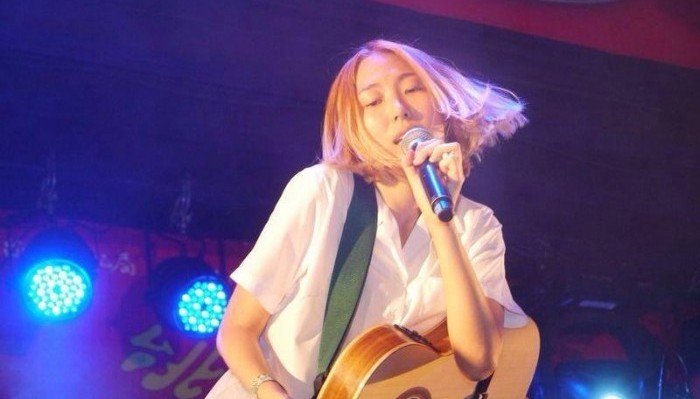 Making a name for herself in recent years as the resident weird and wacky scientist of the Chinese music industry, Joanna Wang’s taken her ideas and music to an entirely new level with her newest album “Bob Music”. Joanna plays around with the word “Bob” in her title, which usually links to the phrase ‘bobbing your head’ while referring to a very square and plain kind of person in general. Indeed, Joanna incorporates these two themes into her album with a fusion of daily life’s troubles and groovy rhythms weaved throughout the entire concept. Being normal may seem boring, but it won’t after you listen to Joanna’s album.

Infusing inspiration from game music and a little bit of EDM into her album, Joanna turns the entire traditional structure of pop on its head. Short ditties, songs about buying crap, fusions of 1920s’ doo-wop with game music; everything and anything that you could never have imagined being done with pop music is in this album. Joanna takes the normalities of life and adds a vibrant splash of colour to each song, with tracks such as “Truckin’ everyday”, “Whip out the shampoo” and “Teenager Statement” meaning exactly as their title implies, but in unique and innovative ways. Although every song in this album is most definitely worth appreciating, here are some of my picks to give you a little taster of what’s in store for you.

The first track “When I Nod” is basically an encapsulation of the entire album’s concept all in one song. The rhythm of the song is unrelenting; here Joanna’s voice actually becomes a rhythmic instrument too, with moments of jarring resonance and purposeful inflections. Incorporating a childish tone, the song takes you through a story of a world full of mundane activities, into Joanna Wang’s magical cupboard of nonsensicalness where people are all just bobbing their heads up and down.

“Truckin Everyday”（每天開卡車） is one of my favourites, a song about a driver who loves driving his truck around town. With carefully placed nonsensical elements such as repetitiveness of words over and over except with small variations to the melody or even unconventional melody changes, there’s definitely a sense of childlike nonsense in its most aesthetic form displayed on full blast throughout the entire album.

“Whip out the Shampoo” （把洗髮精拿出來）follows a much-similar theme of childish nonsense, showing off a creative mix of latin beats with EDM influences. Lyrics-wise, the interesting edge of this song and in fact the whole album is how Joanna manages to take the most mundane routines of daily life and write these lyrics in such a way where it makes you wonder on one hand what the hell she’s going on about, and on the other, actually beginning to think “Hey, this music is actually pretty good”. Who would ever think a song that literally just takes you through the routines of rinsing, lathering and repeating could be so interesting? If you loved this, you’ll love “The Scientific Method” too, which deliberately uses a classical , baroque-like arrangement before transitioning into game-genre music accompanied by yelps of excitement from Joanna such as “got it!” and “Eureka!’ which just honestly crack me up.

“Teenager Statement” （青少年宣言）is another interesting one which somehow manages to incorporate the sulky nature of the teen not only in the way she pronounces her words in this preppy way, but even in the sluggish, and disinterested nature of the melody. The lyrics especially make me laugh when they go “I’m leavin’ mom and dad, I’ve had enough of this cause I’m a rebellious teenage boy” because it completely reflects the idea of teenagers as angst-ridden individuals who really don’t know why they do what they do (for the most part anyway).

Also, I loved the “Spanish Flea” song, a cute little ditty about a little spanish flea who loved to sing. Incorporating a disney-like enthusiasm into the song, I think Joanna’s absolutely turned the phrase “You can’t make this stuff up” on it’s head. Rather, her otherworldly imagination takes us with her on a magical carpet ride into her wacky world where fun never stops.

But one question that followed me throughout the album was this. Do each of these songs really have a deeper meaning than just about washing your hair or driving your truck? And after listening to the album countless times until the entire inside of my head looks like it’s been brainwashed on a diet of children’s TV shows, I decided it was time to really dig deeper. And looking at what I was able to gather from this album, there is most definitely a deeper meaning to it. Although a crazy, wonderful musical scientist, there is no doubt about the mental stability and meticulous effort that Joanna puts into every song. There is ALWAYS something more crafted into each and every one of her songs, and that’s a fact. In terms of this album, I believe Joanna’s making a statement about how childlike wonder isn’t always a bad thing. Looking at these adults working their dead-end jobs with no enthusiasm for anything in life. Is that really how we all want to end up? Do everything in life with childlike pinches of enthusiasm and nonsensical wonder, and maybe, just maybe it could make our world a better place.

An extraordinary listen that will blow your minds. Get onto it!