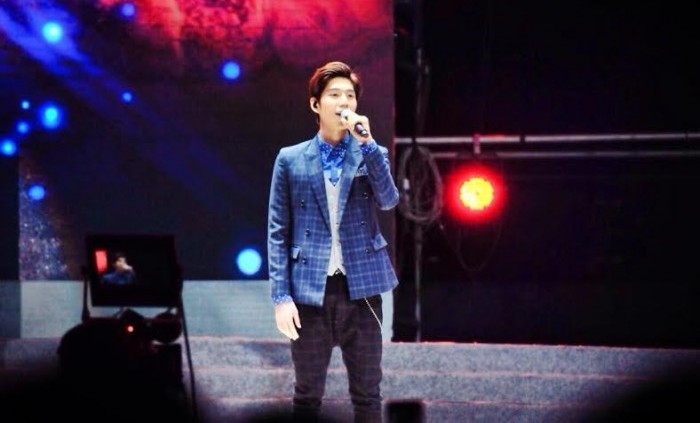 Interview with Peter Pan〈潘裕文〉／I have no time to complain; I can only keep moving forward. It has been a while since I finished this article.  This article was written before Peter’s concert at Legacy this March.  At that time, the news were all about Peter, reporting that he was going to sing his “last song” at this concert.  Feeling that “if I don’t ask him this time, then I won’t have any chance to do this again,” I was prepared to bombard him with questions I’ve had since he joined the One Million Star〈星光大道〉during the interview.

◎ Please give a brief introduction about this single “The Neverending Marathon〈永不結束的馬拉松〉”.

After a year of ruminating, I have different thoughts about my music.  This song is a milestone for me and it records my eight years of being a singer.  It is accomplished by my good friend and lyricist, Chen Xin-Yan〈陳信延〉, Pan the composer, Han Li-Kang〈韓立康〉the arranger and Zhang Jian Jun-Wei〈張簡君偉〉and I as the producers.  I still think I’m better at singing positive and powerful songs.

◎ This time, you’re the producer of your own.  What’s the character you like most or what do you want to express the most about your voice?

“The Neverending Marathon” is a song with details.  I want to present it in a positive way, but I don’t want to go too far so it’s kind of hard to find a balance between these two.  At the end, I’ve recorded it four times in total.  There is still a gap between what I want to present and what I can present.

◎ This time, you also direct the music video for the first time.  Can you share with us the feeling from planning the whole thing to shooting the music video?

At first, I wanted to shoot running with time-lapse photography, but then I figured that I could do it in the other way to make it better, so I asked a photographer whom I have cooperated with for a long time to help.  After our discussion, we decided to present the music video in the way we both like.  The video is actually about the dialogue with myself and my emotional solitude.  I also look into the development I have had in the past in the music video and remind myself that as I’m looking back reminiscing about the past, I should also move forward at the same time.  The end of the video is like the recognition I give to myself – Peter really accomplishes lots of things after all these years of hard working.  I hope everyone can give recognition to him- or herself as well.

◎ Will this be your last song？

Of course I don’t want this to be my last song, but this is indeed the most important thing I want to do right now.  At this moment, I do feel a sense of achievement.  I’m the type of person who lives in his own world, but through singing, my world will then connect with others.  Besides this, singing itself fascinates me; it can move lots of people and it can also let people understand what you’re thinking about.  I’m happy to be understood and I also think that I’m a lucky guy.

◎ If this is really your last song, then where do you see yourself in the following years?

If I can’t continue singing, my second dream is becoming a cook.  Because like singers, what cooks make are also pieces of work and people can enjoy the taste of happiness from both of the work.

◎ I found that there is always a theme of “chasing” in your work.  Like you were being chased by time in the last album “Listen to Clock〈聽克拉克說〉” and the album “The Neverending Marathon” is also about chasing.  What is the thing you want to chase in music?

◎ You started as an artist signed with HIM〈華研〉and now you’re an independent artist.  Can you share with us what has changed in between and your feelings for this?  Also, how’s the process of negotiating with the record companies these years?

Honestly, I don’t know why every time after our discussion, there’s no further news.

Perhaps it’s because the records industry in Taiwan is shrinking right now.  Many of the most recognizable singers tend to release their albums only once every two years, so it’s obvious that there are no enough resources left for us.  I’ve discussed with some senior singers and they’ve given me some advice, which made me rethink about my path in the future.  I’ve felt like this is the farthest I can go once, but the reality is cruel and it won’t let you stop for too long so I can only force myself to keep doing it.

Furthermore, I want to clarify that I’ve been keeping a good relationship with HIM, but I still don’t know why there are no more albums after releasing the album “Dreamer〈夢想家〉”.  I started to hate my voice at that time and I even began to doubt that I’m not the type of singers of this time.  I think that both the times and the environment have great impacts on the popularity of the albums.  The company will still base the trade marketing strategies on how the public like the released albums and they will even use this as an indicator to decide whether they’re going to release your next album or not, but I still respect all the decisions made by the company.