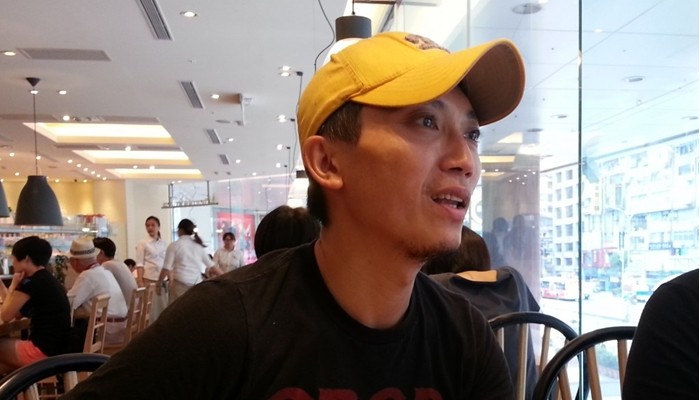 And then, I find myself speechless to this seemingly simple question. Just five minutes into the interview, and StreetVoice music channel director and senior DJ Tree Jr. (小樹) has already created a shockwave, striking myself as well as myths in local music industry.

We meet in a café. Tree Jr. is very kind, and he often laughs out loud. When I ask about independent music in Taiwan, though, he responds seriously. "You need to tell me first what 'independent music' really means in Taiwan. If we don't ask the right questions, we won't find the right answers. In my opinion, major music labels are parents with kids. They need to ensure consistent income, so they choose something familiar, safe and sustainable to the whole family. Independent music, on the contrary, are single men and women. They only need to take care of themselves. That's why they can afford to have freedom with no strings attached."

"With freedom as such, independent music need to be experimental, bold and courageous in music form. If it only follows the common norms, or just refers to musicians without contracts, it's not independent music to me."

Innovation is more than just being new. Music often results from confrontations and struggles. "If you live besides a local market in Taiwan, it's impossible to create British rock solely based on your imagination. It's unreasonable to create out of context. Voices and sounds we hear every day will change how we create music," Tree Jr. says.

These voices, urban sounds and cultural contexts are indeed changing details in music works, and music in Taiwan should really spend more time, words and notes to "talk about ourselves" with the world.

As Tree Jr. describes it, major music labels should not be regarded as the axis of evil. "Many of these music companies may not have the best creativity, but they have done many solid works. Many elements and characters are interconnected in this industry. Singers, songwriters, producers, recording artists, track order and song selection are all professional in itself. Why does an album contain ten tracks, instead of nine? Why is this track put before the other? There's a logic behind each decision. We used to spend two months discussing about track order in a greatest hit album. We need to constantly remind ourselves, 'what are we doing now?' and 'do we think clearly on our path?'"

So, what are we doing now? Does our music industry think clearly on our path? "For example," Tree Jr. asks, "where are our numbers?"

"Isn't it weird that there are no good numbers to check in this industry? While ranking charts in other countries provide sales numbers in records and digital channels, we hide these numbers in Taiwan because they look miserable." For online streaming services, Tree Jr. proposes a more detailed billing system, as pop lovers mostly ignore jazz tracks, and vice versa. "Even if you have a million tracks in the database, those on the top chart always generates more clicks and revenues. It's not helpful to the industry and listeners alike."

While music festivals in the past five years in Taiwan are more than the previous thirty years combined, Tree JR. hasn't seen the real influences. "Music festivals should be able to highlight these musicians and performances in front of the market. Do our music festivals meet this objective? I think music labels, platforms and festival curators should serve music creators and a robust industry."

He refers to Fuji Rock in Japan as comparison. "Fuji Rock is built on solid professional services. I don't really need to read the band list before purchasing tickets with confidence. Many children come and enjoy music with their parents. No one complain if they slip on sand or dirt, because they care about experience and music more."

"Music festivals in Taiwan, however, have become gatherings of word geeks, and listeners rarely discuss about music skills, which influence most magazines and albums. Is it really healthy that everyone is only indulged with the fancy atmosphere?"

Of course it's not. Music should be created with a solid practice, mainstream or independent alike, and it's eventually related to industry, skills and reasonable market scale. Musicians cannot and should not live in a vacuum. In this transition period, although we haven't found the right answers, we can start by asking the right questions.