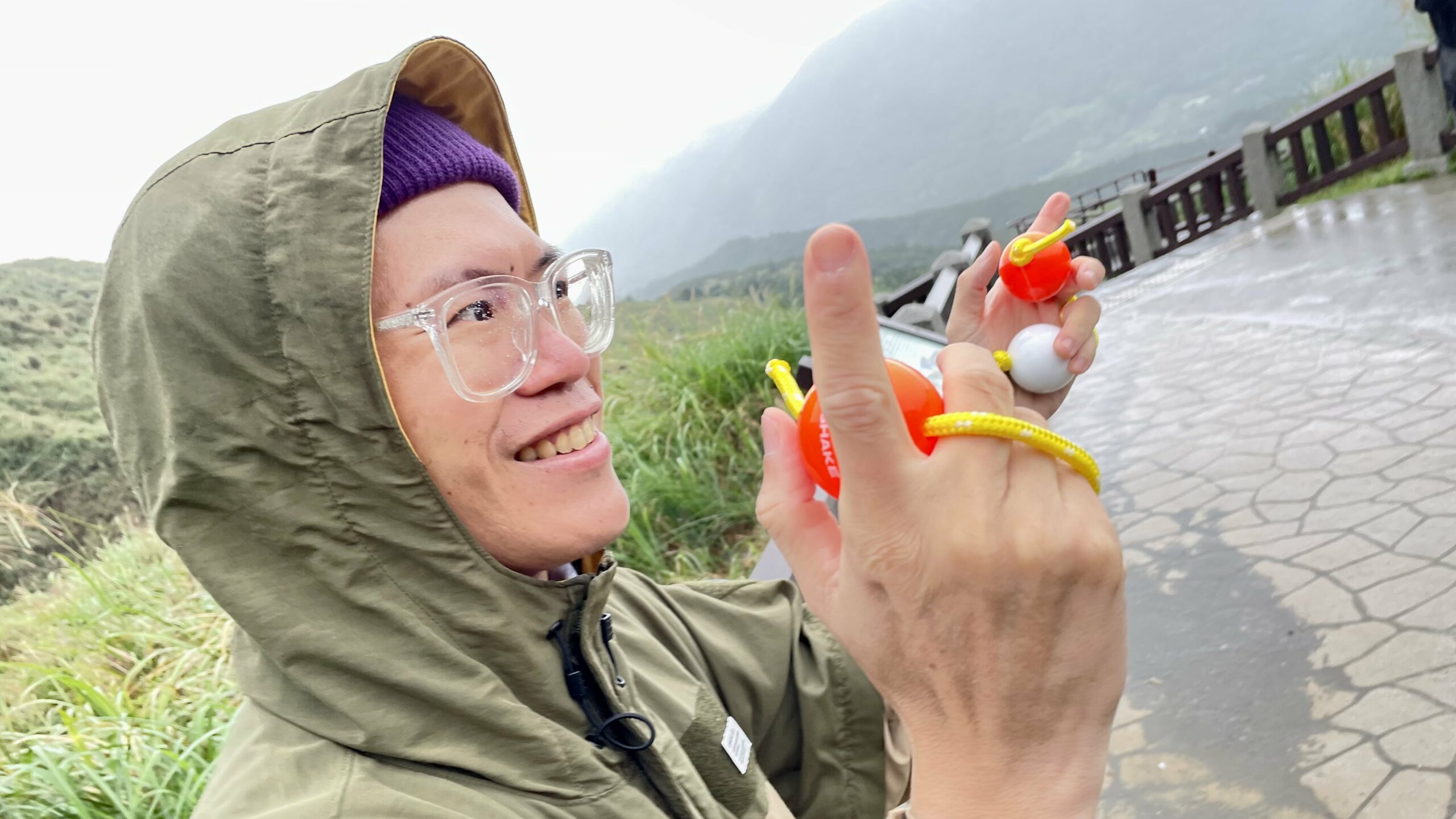 When PUZZLEMAN made the album “Yang Ming Beats” the idea was to create a sonic landscape that was like walking up Qixing Mountain, the highest point in Taipei.

It’s a rugged but not-too-difficult climb that on a good day offers fantastic views of the basin surrounded by mountains that is the sprawling capital of Taiwan. From here you can trace the city’s rivers and pick out its landmark buildings like Taipei 101. The sunsets are often spectacular.

Yangmingshan has a micro climate, which means the plants and weather are different from the rest of tropical Taipei. In autumn the leaves of the Formosan Sweet Gum turn yellow and red silvergrass flowers bloom. It also means you have to choose the right day to climb Qixing because the clouds can descend without warning and there will be zero visibility and pelting rain, even on a blue-sky day in the city below.

There are also plenty of hot springs that are perfect chill out zones after a long walk. It is this mix of wild weather, ancient trails, living on the edge of doom and relaxing in nature’s abundance that is the inspiration for “Yang Ming Beats,” an album that builds and climbs, mixing beats and styles. It samples frogs, bubbling streams, the wind and other sounds from Yangmingshan, offering a shimmering ambience that is almost classical in parts, with vocal flourishes from Indigenous singers like Panai.

The album has 14 songs and clocks in at 62 minutes, which gives you time to make a leisurely ascent. To promote the album, PUZZLEMAN figured that since Qixing has an elevation of 1,120 meters and there are thankfully no cellular radio towers at the top, listeners would not be able to stream the album at that height.

So, what he did, was go old-skool and made tape cassettes for a “Climbman” (rather than a Walkman) player that he distributed to all the influencers who were there for the album launch party. That said, I tried streaming the album myself on a climb up Qixing in early November and it only cut out near the top and then came back in full stereo when the mountain had finally been scaled. So, all good. A thoughtful gentleman, PUZZLEMAN turns up at Xiaoyoukeng on time. The wind lifts the rain and blows it in horizontal sheets across the car park, where the trailhead for the 40-minute or so hike up Qixing starts. The mountain and its sisters look like a traditional Chinese ink painting.

He is dressed for the weather in urban wear from the Taichung label Filter017, a purple beanie, black cargo pants, off-white trainers that have evidently seen some walking, and generous, transparent acrylic glasses that make him look a little owl-like.

Aka Xiao Xin (小鑫) and Ah Long (阿隆), short versions of his birth name Cai Long-xin (蔡隆鑫), is in his late 30s and amiable. Despite the dismal weather he doesn’t complain when asked to pose here and there for his photoshoot in the driving rain. He even comes prepared with a set of bright, acrylic orange and white asalato, which are used on the album and for which he seems to be the main spokesperson in Taiwan.

Originally from West Africa and made from two gourds connected by a string, the modern, “Made in Taiwan,” ABS steel-plastic and nylon string version of the instrument looks like a toy from the ‘70s called clackers. They were ultimately considered so dangerous to children that they were classified as a “mechanical hazard” and banned. PUZZLEMAN demonstrates with alacrity and aplomb the asalato’s percussive rhythms, in the lee of Mount Qixing, with the spattering rain misting his glasses.

A quick internet browse identifies him as a YouTuber who gives no-frills asalato lessons. He sells asalato under his name with the brand KAO!INC, along with the “Yang Ming Beats” cassette for climbing in Yangmingshan. The advert runs: “Follow the natural beats of PUZZLEMAN, as he walks the unique bamboo forest roads and volcanic landscapes of Yangmingshan. Feel the sounds of nature, co-created with the mountains and forests produced here!” There’s also a cyan green PUZZLEMAN hotel key ring for NT$250.

PUZZLEMAN started taking music lessons at the age of 12 in Taichung, where he was raised, then taught himself guitar for a couple of years. A musical autodidact, he has never stopped learning. He recalls his first love was the “Master of Puppets” by Metallica, a thrash metal song that inspired him to self-study guitar for two years. This eventually led to an opening in a punk band.

That went well for a while, until the group was booked to play some gigs in Australia and PUZZLEMAN almost literally missed the boat. The way he tells the story now is that his fellow bandmates unaccountably forget to tell him they were going Down Under and he only learned about it from friends when they had left. Looking back, he seems to think it was fated, “I figure it was a good lesson to learn, to go solo. We are all good now.”

PUZZLEMAN has carved out a career in music despite challenging local conditions. You have to be pretty devoted to make a living as a musician in Taiwan unless you decamp to China, or do well enough with a couple of mandopop hits to segue into the celebrity circle merry-go-round of TV appearances, lucrative Lunar New Year events and the occasional comeback concert.

We talk about why it’s so difficult despite the fact that Taiwan is rich and relatively well populated. Ideas fly around, like too many free concerts, the arts not being appreciated, the need for professionalization of the industry. It is better now, but the fact remains that not that many make it and except for the very few, it’s not a lucrative career choice.

This does not overly bother PUZZLEMAN because he has over time honed his entrepreneurial skills, is innovative, promotes himself smartly on social media, and is doing music for the love of it anyway. This is obvious when you see him playing. Not only that, it wasn’t easy for him to get where he is today and it helps him appreciate what he’s got. “I love my life, it’s full of great moments.” After being bumped by his band, PUZZLEMAN moved on, not only to China but also in terms of his musical style. He lived in Yangshuo, Guanxi Zhuang region, and Beijing for two years, where he was inspired by African sounds, particularly reggae. On returning to Taiwan he did his military service in Kinmen and then decided to try his luck in Taipei.

It was around 2010 and the musical scene was indie and DIY. To support himself he did a succession of dead-end jobs, like selling sneakers and delivering goods for a logistics company. He recalls being able to afford just one pair of shoes that were so full of holes they were constantly wet.

What might have been soul destroying for some proved to be an opportunity for further self-learning and improvement to PUZZLEMAN. Over the years he has taught himself to play the guitar, piano, organ, keyboards, drums, asalato, and DJ. It was at this time that he saved money on new shoes and instead bought the Akai MPC 1000 beat sampler, a musical production center that enables the artist to make beats, samples and helps with the song creation process.

“I studied every day for four to eight hours, eight hours working and eight hours sleeping. That was my life and eventually it paid off,” he observes. “Over time I learned to do everything myself and got into production. I’m just grateful I’ve got dry feet.”

His first solo concert was in Tapei’s Ximending in 2012. Eventually he managed to get enough material together for a first album, the nine-song “Organic Melodies” in 2017. Raw in parts, hip hop in style with guitar flourishes, it nevertheless has the keyboard and finger drumming that has become his trademark. Finger drumming essentially creates samples on a groove box. The console is portable and often used by musicians and DJs to stage performances, which can become elaborate and in some quarters is called controllerism – the mixing, scratching and modification of digital sounds and even visual elements. In the studio, the beat master J Dilla used Akai MPC pads to create a new production style that influenced hip hop, jazz and neo soul.

PUZZLEMAN says he was inspired by the Japanese duo Hifana to incorporate finger drumming and asalato into his music and performances, while Vogue Taiwan calls him “Taiwan’s most prominent finger drummer.” Introducing his 2021 album “Please Use Before Sleep” it described his new musical direction as “lofi hip hop,” while PUZZLEMAN himself calls it “chillhop.”

Originally the album was going to be about life and death but he says this changed after COVID struck. He had even sampled funeral singing, which his mom does, and played the traditional Chinese tanggu drums for one track. It was discarded when he decided instead to make an album “about the state between sleep and waking, lofi and white noise. I was gigging a lot and had lots of energy so because of lockdown made the album instead.”

The energy flowed into “Yang Ming Beats” a year later and PUZZLEMAN seems to be in a great space as Taiwan opens up, with plans for a national tour and possibly Japan dates too. Creatively, he seems to be at the top of his game.

“The next album, I will be using all my toys, with more hardware and more analog, for a bigger production sound.”

Here’s PUZZLEMAN with a personal tour of “Yang Ming Beats,” track by track. We recommend you take the hike up Qixing Mountain at the same time, or close your eyes and imagine you are there:

Start Up: “It’s lofi, hip hop and ambient, custom made for the hiking route.”

Go Around: It bubbles along with the sound of wind chimes dominant.

Yang Ming Beats: “I’m kind of showing off a bit with samples from an owl, frogs, bubbling water. I think you get the feel of nature.”

Kasukabe: “It’s got the feeling of hiking in the spring time in Japan.”

Touching: “I was thinking at this point on the walk people are starting to get tired, so this has some joyful beats to cheer them up.”

Against the Wind: “The middle part of the hike is the steepest and hardest part so these beats are to help stamina.”

Cross Mountains feat. Panai: “Actually I made this beat a long time ago and picked it for the album with some traditional singing.”

Kaleidoscope: A tribute to DJ Okawari, from Japan, and his album “Kaleidoscope.”

Rock of Yang Ming: “It’s from a Chinese saying, ‘rock of our mountain’ (他山之石), which means we don’t need to look at the rocks of other mountains. I’m PUZZLEMAN, it’s a bit of a puzzle.” The saying is usually defined as, “A person or opinion that can help correct your shortcomings.”

Let’s Dance: “We are at the top of the mountain, it’s time to celebrate.”

Asalato Dance: “We are still celebrating. Fun is important and life is beautiful.”