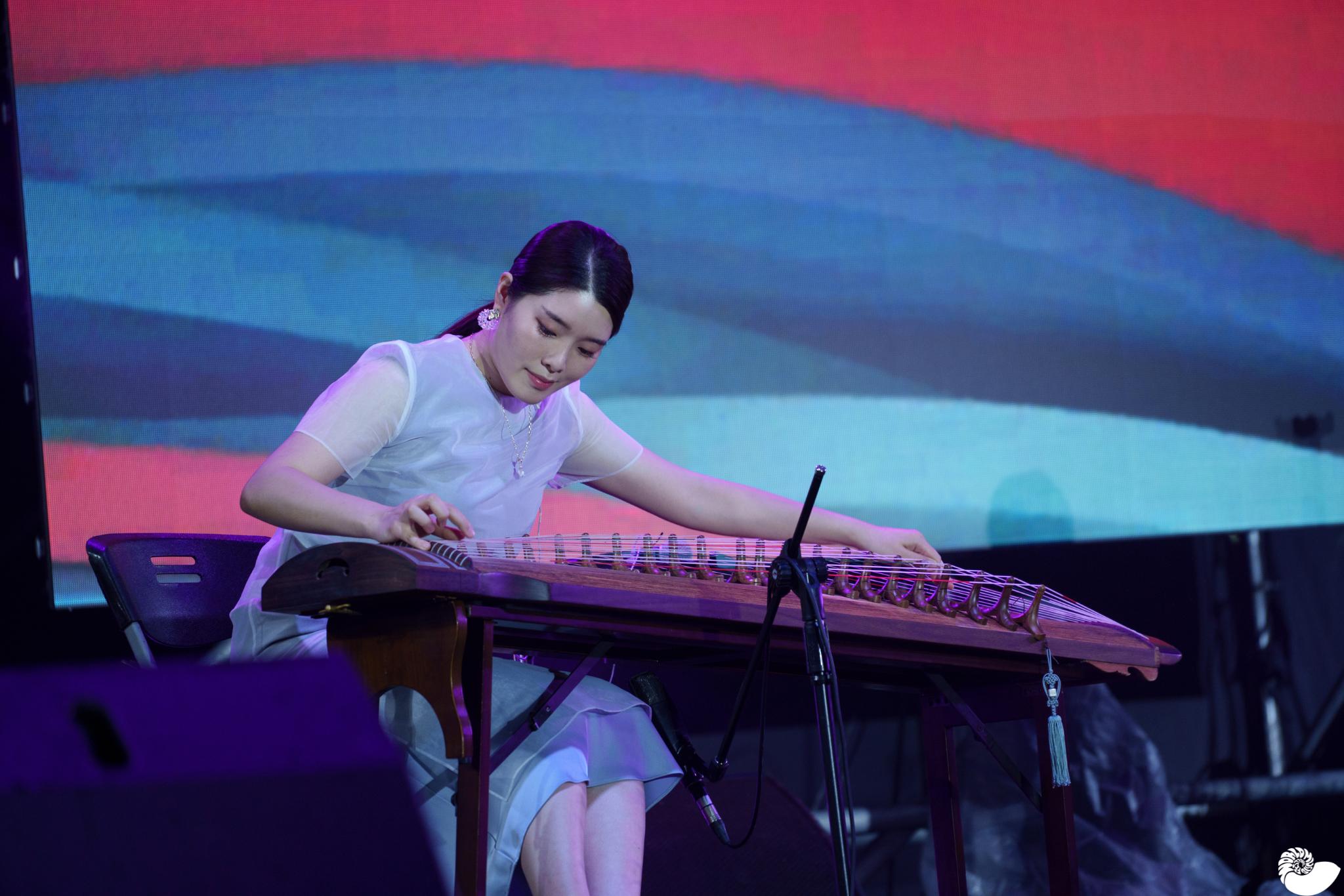 Interview with Hey String at the World Music Festival @ Taiwan 2022

At a time when the exit of the Covid-19 pandemic is visible to us little by little, musicians from all over the world visited Taipei for the World Music Festival @ Taiwan. Among the many musicians who visited Taiwan, I met the gayageum trio Hey String, a traditional music group from a neighboring country, South Korea. Their music, which freely crosses boundaries with traditional and contemporary melodies by playing gayageum, a traditional Korean musical instrument, was one of the best stages for the festival that broke down boundaries and harmonized together. Even on the rainy outdoor stage, I could feel their colorful and beautiful “potential” erupting like the title of their debut song “Potencia.” I interviewed Hey String in order to listen more closely to their activities and music that cross boundaries with their infinite potential. [Park, Ji-hyun] --- Of course it’s not just for Hey String’s music. Originally, 12 strings are traditional gayageum, but about 40 to 50 years ago, 25 strings of gayageum were made by adding 13 strings. And it has been widely used for about 20 years, so it is also becoming a new traditional trend. What’s unique about our music is that we use percussive techniques together rather than using 25-string gayageum. Usually, beating gayageum isn’t a normal playing style. But we’re doing a unique gayageum performance by studying percussive techniques and putting them into our music.

Q: In Korea, compared to western instruments such as the piano and violin, Korean traditional music is very difficult to access to learn when we are young. So how did you start gayageum?

[Park, Ji-hyun] --- Same with me. I also started in a traditional music academy. Q: String trios in western classical music feel familiar, but the ensemble band made entirely of gayageum comes very unique. What was the reason for the formation of a gayageum band or what’s the strength of music made up of only gayageum?

[Park, Ji-hyun] --- At first, we met to participate in a creative Korean traditional music competition as a project rather than creating a team. We were just people near each other. We were really close to each other in our department at the university. While working on the project and preparing for the competition, we thought that we fit well together. So we thought it would be nice if we could team up together. The reason why we decided to do this is that we know each other and gayageum well. Since we know a lot about each other, it has a synergy effect, so we can imagine and create a lot more things than when we played gayageum and studied alone, so we formed a team in earnest.

[Kim, Ji-hyo] --- It was my first time in Taiwan, and I saw a lot of other performers and musicians in Taiwan through this festival, so it was a great experience. Because of the pandemic, I thought that overseas performances might be delayed. Of course, there is still COVID-19, but it was great to come to Taiwan and perform like this because overseas performances resumed faster than I thought. I think this is the biggest festival we've ever participated in. So I was very nervous when we heard that there might be thousands of audiences. But I was really happy the audience responded so well and liked us. And there were so many booths that it was a festival where we could interact with people, so it was a really good experience.

Q: I think you’re getting a lot of connections with Taiwan. I know that you also collaborated with the Taiwanese traditional musician Sauljaljui last year. And like now, this year you visited Taiwan for a music festival. So, do you have any plans to collaborate with other artists in Taiwan or hold a concert in Taiwan?

[Oh, Ji-hyun] --- We don’t have a specific plan yet, but I'd like to keep in touch with the staff and meet Sauljaljui in person. I'm really curious about other artists and musicians. We're always open.

Q: As you collaborated with Sauljaljui in Taiwan, I wonder if you have any plans to interact with other countries’ traditional musicians.

[Park, Ji-hyun] --- I think each team member may have different thoughts, but I think it would be good to collaborate with traditional African music, which has a lot of percussion instruments. Gayageum is a musical instrument with a tone and interval, but I think it also has percussive elements because we can express something by bouncing or beating strings. So I think that if we collaborate with traditional African music with various rhythms, it'll be fun.

Q: What does the Hey String mean to you?

[Kim, Ji-hyo] --- I think Hey String is my musical base. This is because we were able to get away from following the existing music we learned and try to create new styles of music with the members for the first time, so we were able to see ourselves grow together. And above all, the members know my gayageum performance style and music that I want to do the most, so I think Hey String is my musical foundation and base that I can continue to grow together.

[Park, Ji-hyun] --- No, I'm still looking, but we're all looking for it together. Our members are all on the same boat, starting from the beginning, going through and experiencing one by one, finding answers, bumping into the rocks, and repeating the process together. In this process, sometimes we meet rocks and obstacles, and sometimes there aren't treasures, but nevertheless, it's like a treasure ship because it's fun to repeat our adventure of moving forward again.

[Oh, Ji-hyun] --- I just thought of it, but I think Hey String is “Blood Sweat & Tears (title of BTS music)” to me. I think I grew up a lot by spending almost half of my 20s with Hey String and going through a lot of good things and many things together.