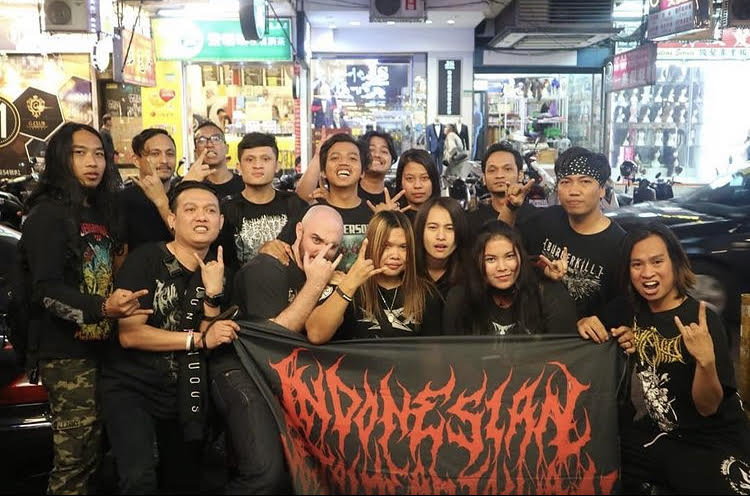 Taiwan is home to a hundred thousand immigrants, especially from Southeast Asia. Referring to the National Immigration Agency data, 33 percent of these foreign residents come from Indonesia. They come as a worker in various industries and as foreign student. Based on data from the Indonesian Central Statistics Agency, in 2019 there were 79,574 Indonesians working in Taiwan. Overall, it is estimated that the number of Indonesian migrant workers in Taiwan reaches more than 250,000 people. Like any communities everywhere, they also express themselves through music. Furthermore, attending local music festivals, recording albums and booking shows at local venues, in other words - they are headbanging abroad!

I just moved to Taiwan when I first met Sima, Abu Abraham, Dandy, and Bobo in front of the Taipei Main Station. Sima and I have known each other through the internet a few months before I departed for Taiwan. Sima is a Taiwanese worker in the NGO solving migrant workers' issues. He later introduced me to these three Indonesian Migrant Workers.

"This is Southern Riot. Punk band from Pingtung," Sima said when introducing Abu, Dandy, and Bobo to me. I shook their hands, introduced myself, then we walked together to TIWA's office to prepare for tomorrow's rally. Yeah! Southern Riot came all the way from Pingtung to Taipei just to perform at the migrant worker's rally last January. That's why they seem busy with their instruments. Bobo brought his conga, I see the ukulele's neck thrusting out of Abu's big backpack, while Dandy carried an acoustic guitar on his back. "This is our first performance in public," Dandy, who has a dreadlock hairstyle, told me.

Southern Riot is indeed new. Before they formed the band last year, Abu, Dandy, and Bobo used to spend their time jamming in the music studio. They covered either Indonesian or Western classics for fun, as their escape from the hard laboring in the factory. And one time, they wrote a song that voiced their experience as migrant workers. The song is entitled, "Surat Cinta dari Buruh Migran Indonesia" (A Love Letter from Indonesian Migrant Workers).

Although they might not be identified as punkby their three-chords progression. Rather than playing on distorted guitar and aggressive beats, they interpreted the punk spirit through acoustic guitar, ukulele, harmonica, and conga. Back in Indonesia, this kind of punk music style is quite common and was promoted by one of the most influential punk bands, Marjinal.

Of course Southern Riot is not the only Indonesian band based in Taiwan. Besides them, there are many Indonesians playing music in the migrant worker's community. Though mostly pop music or dangdut music, which is a type of Indonesian dance music influenced by Hindustani, Arabic, and Malay music. They often performed in Indonesian gathering events that were held regularly. But not many of them were playing underground music as Southern Riot do.

Rock from The Countryside

Punk is not something new for Southern Riot members. Although they came from different regions in Indonesia—mostly from the countryside—they are united with the same musical reference. Dandy, for example, has been listening to punk music since he was in junior high school. His references ranged from The Exploited to more pop ones like Blink 182. Meanwhile, Bobo was a drummer for a metal band in his village. Abu Abraham, the vocalist, has a wider range of music from 80s rock to nu-metal.

"When we were here, we jammed until one day Southern Riot was formed with a punk taste like this," said Abu.

From the few Indonesian bands in Taiwan that play in the underground music area, I also found the Jubah Hitam band. If Southern Riot played punk loudly, then Jubah Hitam chose metal as their way.

Jubah Hitam was formed by a number of Indonesian workers domiciled in Chiayi and Tainan in 2019. The band is productive in music recording and has released them on streaming services . "They're all pro-musicians ," said Dandy, when he told me about Jubah Hitam.

Just like Southern Riot, Jubah Hitam were familiar with the music genre they played before coming to Taiwan. They were brought together by coincidence.

"We were united by metal music," said David, Jubah Hitam guitarist. They were formed by coincidence by the chit chatting about Indonesian Metal scene at Warung Indonesia, a shop selling food and goods from Indonesia that can be found in many cities in Taiwan, in their town. “It’s only me and Robby. Suddenly another fellow worker sitting across from my table joined in on the conversation. It turns out that he likes the same music. Dion, who later became our bassist."

"Dion later on introduced his friend who later became our drummer. It is very difficult to find a drummer in Taiwan, especially metal music," he said.

Jubah Hitam is a band of six members now, their lyrics were written in Indonesian about self-introspection. Jubah Hitam recorded their music in the workers' dorm using a free music app for guitar, bass, and drums, then later recorded the vocal part in the studio. They then sent the stems back to Indonesia for mixing and mastering.

"Because if everyone has to go to the studio, it's very expensive here. So we just do what we can do." said Robby. Indonesians in Taiwan were very united, especially metalheads, they called themselves Indonesian Metalhead Taiwan. Nur Khozin, an Indonesian migrant worker who has been working in Taiwan since 2017 became one important figure in shaping this community.

"This community became active in 2018 when one or two members of our community gathered at the Heartown Rock Festival in Taichung. By that time, an Indonesian metal band Kapital from Kalimantan performed. We started actively sharing information about metal gigs in Taiwan from then on," said Khozin, who lives in Taichung.

Unlike the members of Jubah Hitam or Southern Riot, Khozin is not in any band. However, his love for metal music needs no evidence. He is a typical metalhead – long hair and dark clothes. When I talked to him online, I noticed his collection of CDs and cassettes in the background. "There are also some Taiwanese metal bands that I collect. Like Orchid Sword and Fatuous Rump," he then showed me his collection.

According to Khozin, at first the Indonesian Metalheads in Taiwan gathered by Indonesian bands who toured Taiwan, then they began to explore Taiwanese metal scene. Khozin respects the Taiwanese music scene, which has its own musical direction by combining local elements in its arrangements, nice gigs, and an equality in the community.

"Whenever I go to metal shows here, we can easily have fun with the band after they get off the stage. We mosh together. No one pretends to be a celebrity," said Khozin.

"Here, I don't need to be worried about pick pocketing in the mosh pit," Robby laughed.

They are currently quite active in the Taiwanese music scene. Whenever they attend gigs they always carry a flag as their identity.

It was through this connection with the local scene, according to Khozin, Jubah Hitam was the first metal band among Indonesian migrant workers in Taiwan, finally meeting their Taiwanese listeners. They are admired by Taiwanese metalheads on many occasions, including the annual Tainan Jam stage.

"Moreover, they know that Indonesia has a big metal scene in Asia," said Robby, adding that he refused to be called a pioneer. "Because there might be Indonesians out there in Taiwan who play metal, but we don't know."

Even though the bands already have music partners, there are several obstacles that make having a band here relatively difficult. One is when the working contract ends, which forces the band members to return to Indonesia and unable to continue their musical activities in Taiwan.

The other challenge that refrained them from connecting to the local scene is, the visa they hold is permitted as migrant workers, not as professional artists, therefore they could not legally perform in venues. As a result, it is difficult for them to find a place to share their love towards music. Nevertheless, many Taiwanese friends had made efforts to address this situation, for example, Southern Riot had been booked by punk collective Suck Glue Boyz and Halfway Cafe’s activities in Tainan.

I hope that more acts could happen, providing migrant workers wider possibilities of expression by not being judged as a "migrant worker band" but simply as a band. So all the music lovers could continue their headbanging journey!