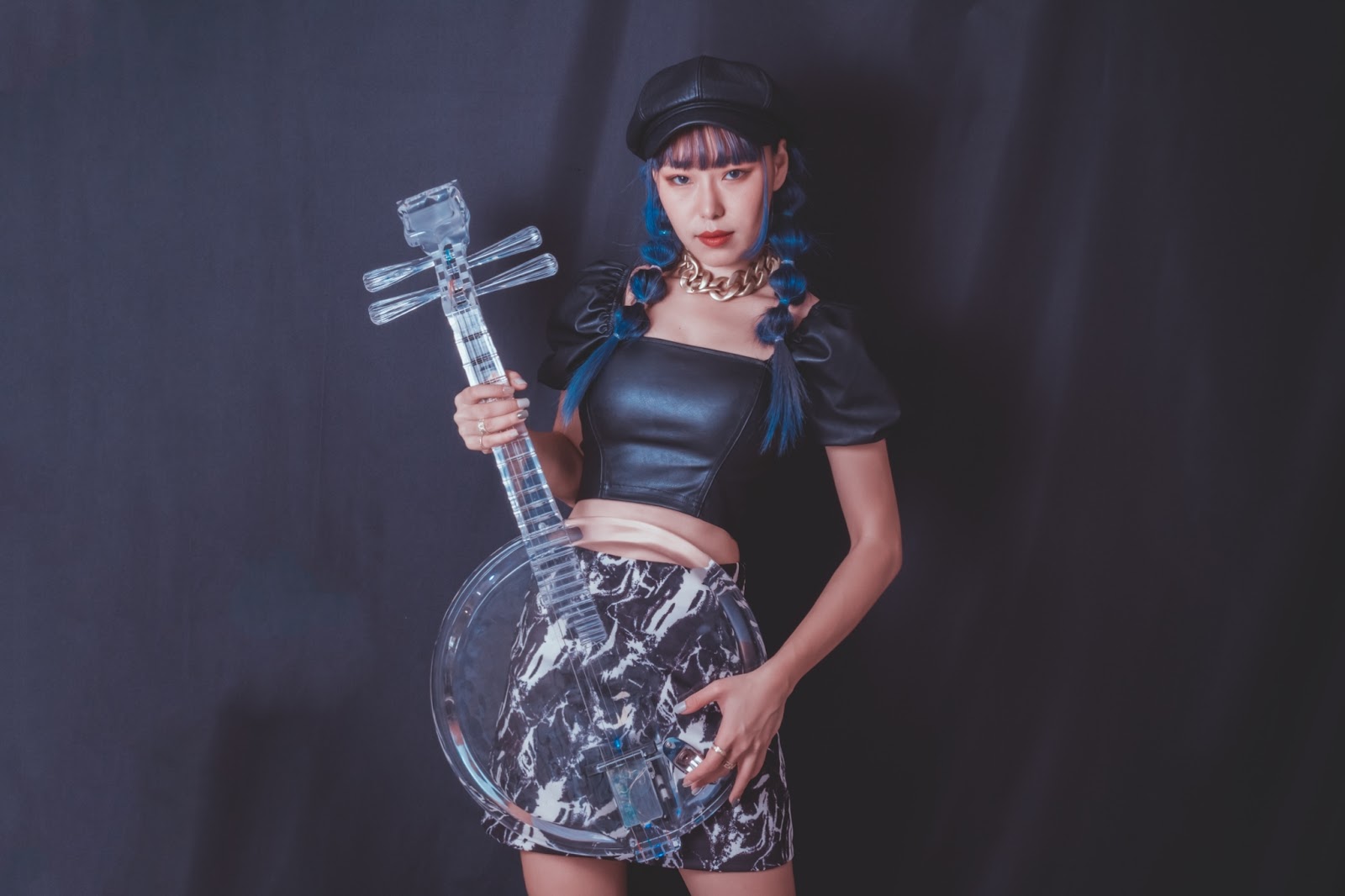 She represents Taiwan’s soft power, a young and talented player of traditional Chinese instruments who has made a big splash on social media since the pandemic forced everyone online. Proud of her country, she is attacked mercilessly by China trolls, who instead of seeing a young woman playing great music feel a sense of existential crisis.

Partly, this is due to her international popularity and online reach. I first saw Nini Music on a Reddit AMA (“ask me anything”) about a year ago. There was a video performance of her playing the zhongruan, a stately, spherical, wide bodied instrument with a straight neck, four strings and 24 frets on the fingerboard. It looked like a giant banjo with big pegs sticking out of the headstock.

Dressed in a slim-fitting, silver lame top with a heart-shaped hole, she stood, long bangs framing her face, facing the camera. Then, with a manic laser display going on in the background, she lit into “Flight of the Bumblebee.”

Originally a lighthearted orchestral piece written by Nikolai Rimsky-Korsakov, in 1900, Nini strummed it at a frantic 185 beats per minute. The mix of classical music, electronic beats and Nini’s visual style was compelling, so much so the rest of the evening was spent going through her back catalog of archived performances. My favorites were a Goth-themed cover of the Rolling Stones song “Paint it Black” on a pipa, and the Billie Eilish cover of “Bad Guy” on a Cruella de Vil cosplay livestream.

She plays five kinds of traditional Chinese instruments, namely the zhongruan, liuqin, sanxian, yueqin, and pipa, plus two Western instruments, the Irish banjo and ukulele. In an exchange of emails, she says her musical motivation is to “teach people about my instruments and share the beautiful culture of Taiwan with the world.”

“I think that many people around the world have never seen or heard my instruments, so if I can get just one person in my stream to remember or be interested in my instruments and culture I feel I have accomplished my goal.” I guess some people would pigeonhole Nini as “classical crossover,” in the company of artists like the Aussie/English classics-synthpop outfit Bond; the eclectic 12 Girls Band, which plays updated Chinese folk music; or violinist Vanessa Mae — a former child prodigy who performed like a rock star, dressed accordingly and earned a cool NT$1.2 billion (US$44 million) fortune before she was 30.

She’s also got a bit of Kate Covington about her. The American singer and multi-instrumentalist produces folk music with a self-described “Celtic/Medieval flavor,” often covering video game soundtracks. An independent artist, she gets her music noticed by promoting herself heavily on online platforms such as YouTube and Twitter, where she’s called Erutan and “katethegreat19,” respectively.

Certainly, Nini Music is also active online, via Twitch, YouTube, Instagram, Patreon and Spotify. She was a winner in the 2020 Gamer’s Got Talent competition, when she played a mix-up of three songs on three different instruments in just three minutes.

She has streamed to audiences of up to 400,000 viewers, and recently finished a Kickstarter campaign to produce her first solo album, a “reimagining of several ancient Daoist folk stories and parables that I was told growing up.” This is expected to come out in January and doesn’t have a name yet.

Her first album, Rise Up, was made with her band G7 and was also financed via Kickstarter. To celebrate the end of recording she did a 24-hour Twitch stream in early August. Nini also plans to tour in the new year to promote the solo album, though she admits “with COVID it’s difficult to know the exact details.

A child of Yuanlin City in Changhua County, Nini started playing traditional Chinese instruments at seven and studied at Tainan National University of the Arts conservatory. This rather orthodox musical education was subverted somewhat after graduating by busking for a year, then resigning her job as a music tutor on the small island of Liuqiu, near Kaohsiung.

“After quitting my job as a teacher, I began to focus on doing more live performances. I did Daoist temple performances, company parties, weddings, music festivals, as well as several European and North American Tours. A 15-city U.S. tour featuring a band of folk musicians and a troupe of dancers was also planned for September 2021 but of course… COVID-19. When the pandemic struck in late January 2020, it could have meant a painful blow to her performing ambitions. Instead of resigning herself to the situation, however, she doubled down and started gigging constantly online, which exponentially increased her reach and visibility, especially internationally.

“I have had so many wonderful experiences on social media especially since the start of the pandemic,” Nini says and recounts the story of a fan who was hospitalized with COVID for more than two months.

“He wrote me almost every day on Reddit telling me how much my streams helped him to stay positive and kept him going during his time in the hospital. He really inspired me to keep doing daily streams and I always had him in my mind when I was streaming. Afterward, he recovered and we became good friends online.”

Social media isn’t always plain sailing and in Nini’s case her love of Taiwan has stirred a storm in China, where any sniff of patriotism brings out the trolls. She says it all began about six months ago when “I decided to put a large Taiwan flag behind me during the stream.”

She started getting flamed by up to 100 China troll accounts. “I also received several death threats written in fluent, simplified Chinese directed at me.” This has continued and at the very end of August she received this missive from “Demonicbear69” on Reddit, “This is China speaking. Because there is a flag representing the Island of Taiwan prepare to die.” The occasionally feisty Nini responded by saying, “Lol how are you on this site this is banned in china. Wumao small pinkie” — which basically accused the individual of being a cheap, state sponsored critic who either had a shy character, or else was a short d*** man. Take your pick. In response, Reddit banned Nini from posting for seven days.

She replied to her supporters by saying: “This isn’t about feeding the trolls. I’m being transparent about the pro CCP, anti-Taiwan censorship I experience on Reddit all the time. But thank you and I won’t stop playing the music and making noise.”

Considering Nini has consistently promoted music created by traditional Chinese instruments, it’s ironic the Chinese attack her for it. This is the reason she uses her artist name and asks us not to divulge her Chinese name or other details, so she won’t be doxed and physically attacked. Even so, she stays positive about the situation, saying she’s not a politician and won’t be deterred.

“No-one’s political views, language, and opinions will ever be all the same but when I am able to perform for so many people of different backgrounds we all have one thing in common — music.”