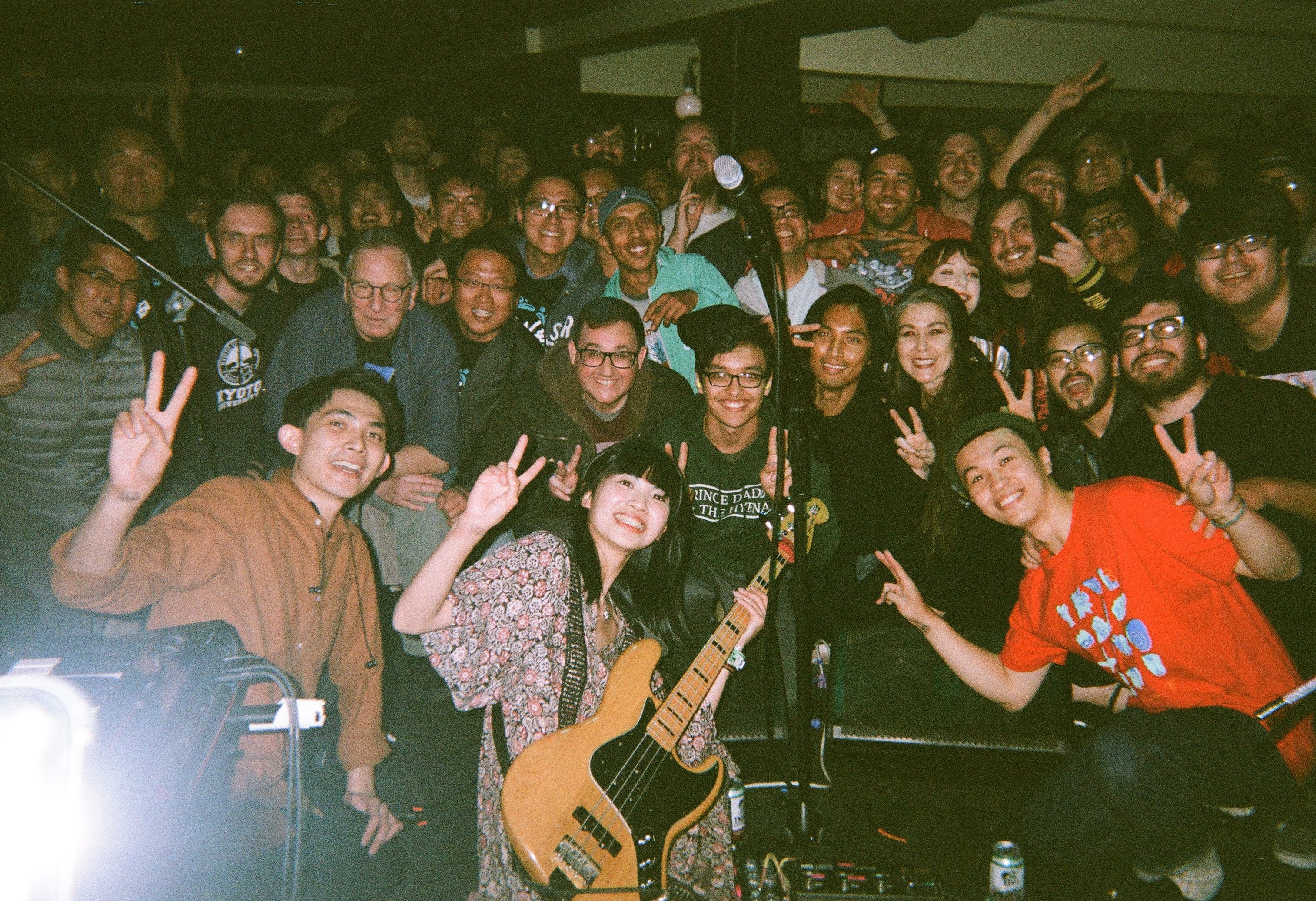 Elephant Gym and the New Wave

For a long time, Taiwan, and Taipei in particular, was a land ruled by post rock. Bands covering the stage in pedal boards, stomping on each one down the line during ten-minute dirges—wailing odes to melancholy, introspection, confusion.

Of course there were outliers. There was Touming Magazine, who took a Fugazi post-punk edge to indie introversion. More recently No Party For Cao Dong have come up with some of the country's purest indie rock songwriting in years. And now, an unlikely young cohort has thrown itself into the fray. Elephant Gym, a mathematically-minded, hooky trio from Kaohsiung, is forcing the crest of the New Wave of Taiwan Indie Rock.

It might seem a strange champion for song-craft and ear-worm purity—a math rock band whose songs are mostly instrumental, with the occasional singer collab thrown into the mix. Bassist KT Chang, whose flowing lines form the backbone of Elephant Gym's liquid, driving sound, sparingly steps up to the mic as well, also doing time on the keyboards. KT's brother, Tell Chang, handles guitars and keyboard duties along with his sister, adding both jangled noise-driven background and clean complimentary arpeggios to the smooth bass lines in a rare reversal of the usual dynamic—guitar firmly in the front seat, bass riding along in the back.

The EG lineup is rounded out by drummer Tu Chia-Chin, whose expert instincts on the fills an nary-a-dropped-beat skills give the band its thumping heart and soul. Together the three form a virtuoso triumvirate. But it's no indie rock version of the shred guitarist and the backing band or the Victor Wooten/Les Claypool bass god slapping their way through tributes to days, months, and years ensconced in the woodshed. The band, says Tell, enjoys a broad range of music, and there is space in their own sound for all of them.

"KT loves the sophisticated styles of Oyamada Keigo (小山田 圭吾) and Tokyo Incidents (or 東京事変 Tōkyō Jihen)," he says. "I listened to a lot of K-Pop. Our drummer Chia-Chin likes city pop and hip-hop from Japan."

You can hear the Shibuya-kei sophistication and catchy pop sensibilities (minus the usual brainless musical conservatism) in the band's output, a pair of inventive EPs, the first of which came out in 2013, and two experimental yet highly accessible full-lengths, the latest of which, Underwater, was released in November of last year. The album delves further into the previously explored depths of jazz and funk, mining the trio's swelling reserves of musicianship and fusion songwriting prowess.

Underwater is a diverse record, a testament to the fact that each member took turns leading the production and composition during the writing and recording phase. It's the sound of a band coming into their own, feeling their own flow. Tell and KT are blood, after all, having come up together from the days when their mother taught them classical music at home in Kaohsiung to the formative years when they discovered their own musical tastes.

Tell and Chia-Chin, meanwhile, go back to their days in the music club at The Affiliated Senior High School of National Kaohsiung Normal University. Chia-Chin remembers his first impression of Tell, a crazy kid playing acoustic guitar in the hallways, trying to recruit more members to the club.

"There was no singing," he recalls, "just a man playing guitar like a madman. He left an indelible image in my mind."

Chia-Chin, says Tell, was a year below him in school. As such, he performed mostly with his own classmates, and he with his. But when Tell saw Chia-Chin play at a school performance, the seed was planted.

"There were many delicate details in his performance," Tell says of his first impression of his future drummer's style. "At that time, I thought that it will be interesting if we can form a band. After my college exam and graduation, we started performing together." Then there's the tricky brother/sister dynamic. Being in a band with family is to walk a razor's edge. There's a potentially poisonous co-mingling of the personal and the professional. Conflicts from home and the practice room have a habit of spilling over from one space to the other.

"It's very hard to control one's temper during a fight," admits KT "If we are not family, we will be more polite to each other. But sometimes we use ugly words and confuse band business with private issues."

Fortunately, she goes on to say, she and her brother have found a way to make it work, and actually get along quite well considering the extra stresses placed upon them not only from being in a band, but in being in a band that has experienced a slow-burn towards an elusive, international level of success and exposure from one release and touring cycle to the next. First breaking out in Japan, the western world has begun to clue in to one of Asia's heretofore best kept secrets, a growing awareness that culminated in Elephant Gym making an appearance at this year's incarnation of SXSW in Austin, Texas this past March. It was an experience to be savored, says Chia-Chin.

"We have never seen such a large scale commercial music festival. Every day was hectic—performing, exchanging thoughts about music with musicians from around the world, and communicating with audience face to face. This is such a rare experience that we won't forget."

The festival appearance was part of a 12-day tour of the U.S., performing a handful of dates from east to west, spanning New York to San Francisco. The American leg was part of a larger world tour that bled from the latter half of 2018 into the middle stages of the following year. Reviews from the tour were uniformly glowing, one from the New York stop in particular lauding the group's tightness, their skill as a live band, even KT's between-song stage banter. The band seems to take any praise they might receive in stride, maintaining a humble air during a crucial time when many a band falls victim to swollen egos and entitlement syndrome.

"We are always surprised at the exceedingly passionate welcome from the foreign fans," says Tell. "Honestly speaking, we live on a small island, Taiwan, surrounded by sea. The ways we can reach foreign people are mostly through social media and streaming platforms. When we performed overseas, the audience sizes are often above our expectations."

By the time the touring cycle for Underwater wraps up this fall, Elephant Gym will have been on and off the road for 18 months, traversing the highways and byways of Japan, China, the American continent, and Europe, taking their music to places that they, by their own admission, never thought it would reach.

"This album has brought us to many places that were far beyond our wildest imagination, and we are still trying to adapt to this kind of working pressure," says Chia-Chin of how the band has navigated this unfamiliar territory.

Once the band is done with its 2019 dates, the three of them will take a well-deserved break in the first half of 2020, resuming activities later in the year. When that time comes, the band has plans to do more of something it did on Underwater, collaborating with singers who perform in different tongues, as they did on the song "Moonset," a dreamy, funky number wherein vocals were handled by singer/songwriter YeYe in her native Japanese.

"To cooperate with different artists is bitter sweet," Tell explains. "Almost every artist has a unique world vision and a special toolkit, such as languages, rhetoric, instruments. After the collision of two or even more different cultures, how to bring all these cultural fragments together is a lengthy and challenging journey."

Any challenges they might face along the way are worth it, however, says Tell. Together, he, KT, and Chia-Chin have figured out how to weather this first storm, but they know that with growing fame will come stronger winds. This, Tell goes on, was not something they or anyone could be fully prepared for. It's something you just have to experience. Then it either kills you, or it makes you stronger.

"The stress on our mental and physical conditions was unexpectedly huge after the tours," he says candidly. "How to keep the novelty of playing music and arrange a proper scale for our performances is the next issue we will face."

Before further growth, though, rest is needed. A hibernation before the spring.

"We really need an intermission to digest all the sudden thoughts during this fast-lane period," says Chia-Chin.

And so the New Wave of Taiwan Indie Rock waits for the disturbers of its waters to return. When they do, Elephant Gym will ride the wave and spur it on as far as it will take them—as far as they will take it.