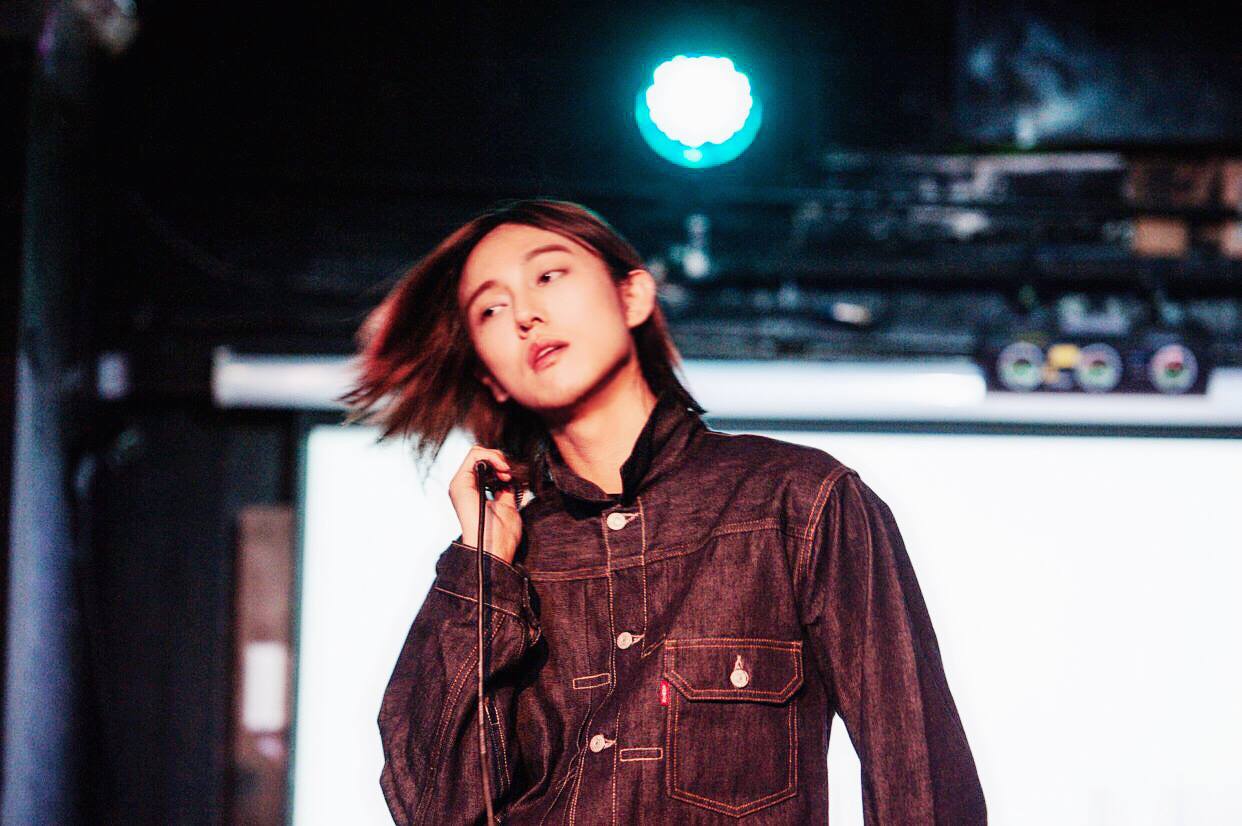 Getting to Know CHIU PI: Mysticism, SXSW 2019, and Narcissus Tour

Nailing down a way to classify CHIU PI’s style is tricky. His work seems to be constantly on the cutting edge, but still relatable. As a paradoxically enigmatic and familiar part of Taiwan’s electronic music scene: part poet, part composer and producer, multimedia graphic artist, music video director, performance artist, and part self-branding creative powerhouse, none of these titles can truly encapsulate the plethora of roles he takes on.

Remarkably, 16 albums of his music have been put out online since 2013. The striking variety of albums range in style and genre from orchestral or minimal ambient to dream pop, breakbeats, industrial soundscapes, and IDM flourishes; some consisting of purely haunting instrumentals and others with a steady stream of poetic dreamy vocals.

To generate such an impressively eclectic body of work, CHIU PI maintains a unique aesthetic and a personal vision behind each artistic narrative he creates. With an extensive knowledge of contemporary art culture and prodigal musical talent rooted in his study of piano as a youngster and mastering body movement as well as percussion at U-Theater, a famous performance art troupe in Taiwan, his work has continued to grow and evolve while still maintaining a consistent and intriguing aura. “I study my own feelings. We usually do it from our inner world, instead of do it from the outer world. I decide what should be put in this market at this moment when I meditate. It could be a new album, or a specific visual style. I make this kind of decision based on my inner situation.”

Embroiled with a love for the mystical and creative elements of George Gurdjieff’s philosophical and spiritual teachings, which were taught to him as an adolescent, CHIU PI incorporates elements related to meditation into his music and visuals.

“Every artist is like an independent brand. Every brand has its own history. Every history has its own context. It has to be like a stairway to go up gradually. If any artist that we work with has a different goal and direction, the stairway will not be able to sustain and get higher or farther. It will fall off, because it doesn't show respect to the history and context. As for us, however, we respect everything we do in the past, including our spiritual training, art training, and theatrical training. Our concerts, packaging, promotion, art style, and music videos all reflect these values. This is very important. This step-by-step construction makes our context clearer and easier to follow compared to other artists. And we have our own history and world view.” An integral part of CHIU PI’s presence as an artist is channeled through his music videos. Other than live performances, music videos are the most visceral and accessible way to experience what CHUI PI is all about. Even while collaborating, he wears many hats as the creative force behind a consistent and authentic image, controlling aspects of each project’s every detail. By narrowing down the spectrum of possibility in terms of collaboration, it allows other artists an opportunity to funnel their ideas through a main conduit or unifying theme.

“When we collaborate with other artists, we'll let them know about the image and branding of CHIU PI, as well as its style and direction. So everything those artists do is in fact a construction of the atmosphere.”

“Other artists INVITE. The invitation is their relationship with others. As for CHIU PI, we don't INVITE, we REJECT. We REJECT to have a relationship with some others. Some people tell others what they LIKE. We tell others what we DISLIKE. The difference is that, for example, if you tell everybody that you like retro or electronic style, those who do retro or electronic will come to you. But we tell everybody that we dislike some specific style to create a realm. We create our contents within this realm.”

I sat down with Chiu Pi at a cafe in Taipei, just hours before his interview appearance on Hit Fm and the day before leaving on his two-month Narcissus Tour in major cities across China. The sense of excitement was palpable though this is not his first solo tour of China. Premiering new live visuals created as a collaboration with VJ Dai, CHIU PI is performing songs from his albums SPLENDOR and Martyr, and at the same time releasing music videos that coincide with each track from his latest release. “We will have many visual designs displayed on the tour, and also we will start to release our music videos. So, the next two months will be full of visual and video release. Those music videos are all shot in New York, so they will be more international.”

As a prolific music producer and multimedia artist with a background in performing arts, CHIU PI has distinguished himself from other musicians to earn every accolade he’s been given. He had this to say about winning the Golden Indie Music Awards for Best Singer/Songwriter and Best Electronic Album in 2018 for his album SPLENDOR:

“For me, I try to relate the award with my growing path. It is a recognition for me as an independent musician. After I transitioned to being a mainstream artist (and signing with ROKON), I won the awards. If not for my effort and steady base in the past as an independent musician, I wouldn’t have been able to receive recognition from the (mainstream) market in the beginning. The award is not a single event, but a step within the long road in my own context… It’s important for me to put the glory in a meaningful place in order to strengthen its significance. If you only combine the award with a single album, then you ignore the context of an artist. Maybe the award-winning album will be considered not so good by the market in the future, but it has nothing to do with the meaning of this award to my own context… I transitioned to become a more mainstream artist after seven years of being an independent musician, and I won the award. I won the award on the first day that I made a change… Ratings come from the outside, but I think everyone should learn to transform the ratings to why this rating is significant to your career and life.” Another major career accomplishment happened earlier this year in March when CHIU PI performed to much fanfare at SXSW Festival in Austin, Texas. It was his first foray into the international circuit, and he was listed among “The Best of Asia” at the festival by The Austin Chronicle, who compared his melodies to “bedroom-sized versions of Sigur Rós's Icelandic epics.”

“...(M)ost of the time I go to music festivals alone, but this time in SXSW, we are a group of Taiwanese artists who got together to show Taiwanese music to the western world, like a team. It gave me a chance to think about my position in the Taiwanese music industry, and also how I can give more to the industry and audience in the future.” “The pop music in Taiwan is still developed at the very beginning compared to other countries such as US or Europe. There are historical bases for the music in those countries. When it comes to music genres such as electronic or hip-hop, for Taiwanese musicians, they just imitate or re-construct from the foreign world. However, when people born in the music scene of electronic or hip-hop listen to Taiwanese music, they might think it’s ridiculous because we don't share the same music history or context with them. In Taiwan, you don't have much burden from the history while making your own thing.”

Conceptualizing projects from top to bottom and doing his own thing seem to be two things that CHIU PI excels at. Take his latest album Martyr for example:

“The songs we choose to put in this album should be related to “Martyr.” The word “Martyr” means the person who dies for his belief or the pioneer in a certain field. You can consider the 11 songs in this album as 11 characters with strong personalities. Thus, the concept of the tracklist is not linear but paralleled. It's just like the streaming series Love, Death and Robots, you can find the main theme in every short story.”

CHIU PI puts careful thought into each album’s core concept and how it fits into his oeuvre. This finesse includes how to translate the album title and song titles from English to Chinese or vice versa.

“Chinese language is not as precise as English, so we actually make our concept precise by giving the album title and track title an English name. The Chinese word "中離" means the player who is suddenly off-line during the game. When 中離 and Martyr appear together, you can know that the Martyr is the person who left our world first. We narrow down what we want to say by the precision of English words...Chinese readers can have their own understanding of this album, while English readers can have a more precise concept of this album due to the difference of these two languages. We try to open the way how people can understand this album, but also give them a direction.”

Shaping the audience’s interpretation of his work and being open to sharing multiple meanings is one thing, but CHIU PI likes to keep some of the magic of artistic creativity to himself so that part of the process remains sacred.

“Last time, when we made SPLENDOR, since the recording method was so special, after we left the studio, we burned all the score sheets. Besides, we didn't allow other session musicians to come in the studio while we were working.” Although he was secretive about the kind of technical equipment he’s using on his latest projects, he admitted to transitioning away from using live instrumentation to more electronic-based production, which makes him a good fit at ROKON, a Taiwan-based music label that focuses on local electronic musicians.

“In my imagination, ROKON is an artistic, elegant, refined and even a brand with the sense of luxury. In my opinion, nowadays, the artists should not focus on what the label can give them or how the label should serve them. The artists in the label are more like employees in the company, so we should try to make the products (music) closely relate to the style or personality of the label.”

Addressing how his work and artistic output fit into a larger scheme, CHIU PI reflected on how personal and universal experiences and sensations overlap:

“The issue that most artists face is that they focus too much on their own experiences, but ignore the universal value that is shared among people. If you don't understand CHIU PI, you might think what we do is very personal, but actually we are using universal language to create our work. Everything we give to the world is based on the universal beauty. The universal value is the most important thing to today's musicians.”